Risk of serious complications increase with each cesarean surgery

Yesterday I shared a Canadian article, and last year a letter from two OBs opposing a hospital VBAC ban, which discuss the risks of cesarean sections including placenta accreta and hysterectomy.

Today I want to share a study that measured the increasing risks that come with multiple cesareans, but before I do so, lets do a quick review of definitions.

In a normal pregnancy, the placenta attaches itself to the uterine wall, away from the cervix.

A hysterectomy (his-tur-EK-tuh-mee) is a surgery to remove a woman’s uterus or womb. The uterus is where a baby grows when a woman is pregnant. The whole uterus or just part of it may be removed. After a hysterectomy, you no longer have menstrual periods and cannot become pregnant.

Placenta previa is a complication of pregnancy in which the placenta grows in the lowest part of the womb (uterus) and covers all or part of the opening to the cervix.

There are different forms of placenta previa:

Today’s study is Maternal morbidity associated with multiple repeat cesarean deliveries (Silver 2006) which included over 30,000 women undergoing up to six cesareans over four years.  (Download the full text PDF.)  Silver measured the complication rates per cesarean number.  And their findings are important to every mom pregnant after a cesarean.  Keep in mind that all the cesareans included in the Silver (2006) study were scheduled and performed without medical indication except for the first cesarean.  All the complications noted were a direct result of the surgery, not of any other medical complication.

The risks of placenta accreta, cystotomy [surgical incision of the urinary bladder], bowel injury, ureteral [ureters are muscular ducts that propel urine from the kidneys to the urinary bladder] injury, and ileus [disruption of the normal propulsive gastrointestinal motor activity], the need for postoperative ventilation, intensive care unit admission, hysterectomy, and blood transfusion requiring 4 or more units, and the duration of operative time and hospital stay significantly increased with increasing number of cesarean deliveries.

Accreta was defined as the “placenta being adherent to the uterine wall without easy separation [and] included placenta accreta, increta, and percreta.”

Below are some slides from the VBAC Class I developed and teach illustrating the  rates of placenta accreta, previa, previa with accreta, and hysterectomy by number of cesareans (Silver 2006).   The number below the cesarean number indicates how many women were included in that category. 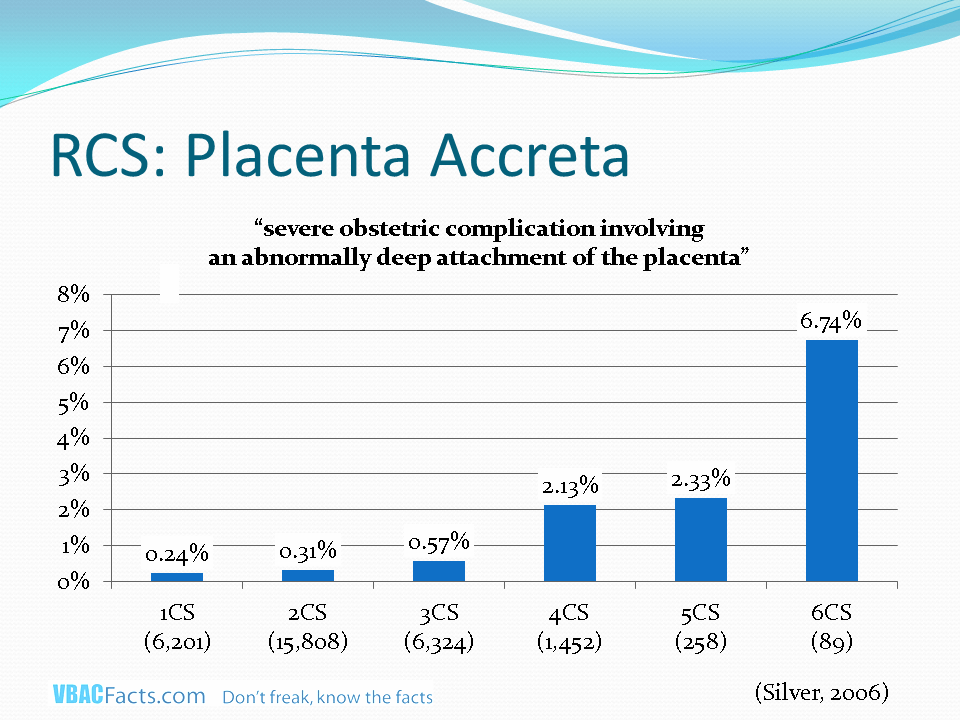 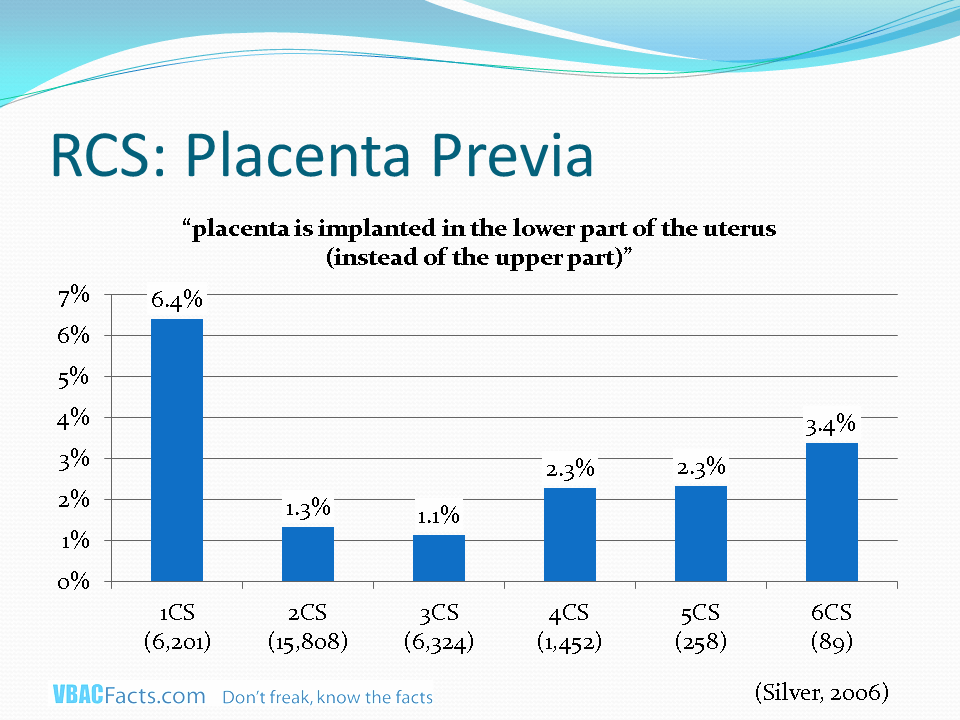 I was especially interested to see the relationship between previa and accreta.  Silver (2006) found that if you have previa, you are very likely to have accreta and that risk increases with each cesarean.  For example, if a woman has one cesarean and is diagnosed with previa in her next pregnancy, her risk of having accreta is 11%.  That risk jumps to 40% in the third pregnancy, 61% in the fourth pregnancy and 67% for the fifth and sixth pregnancy. 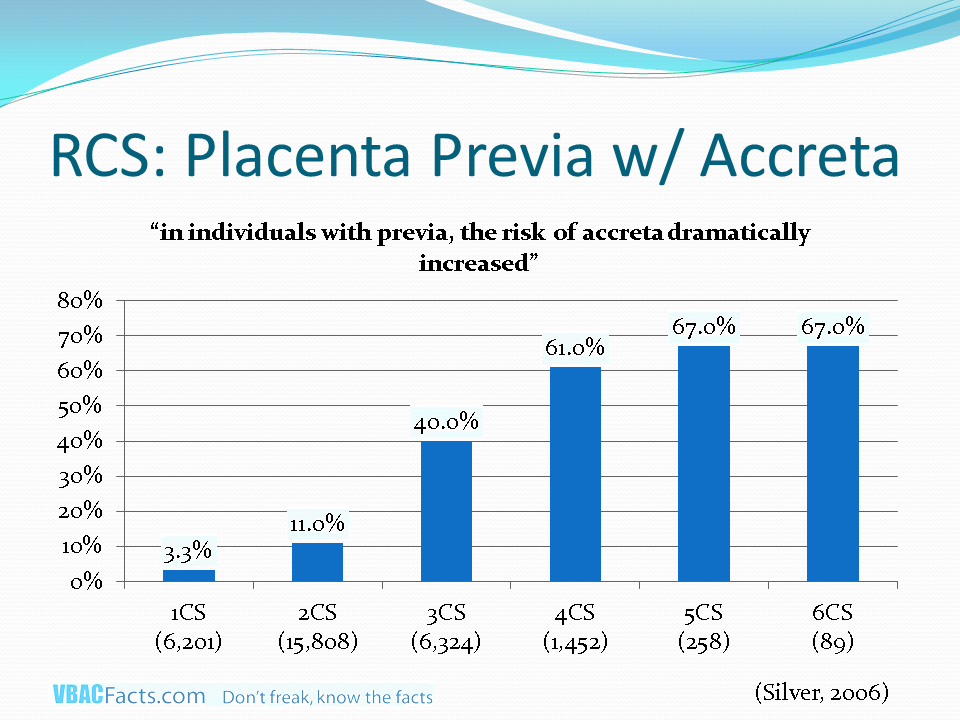 Accreta is nothing to mess around with as it has a very high rate of maternal mortality (up to 7%) and morbidity including hemorrhage and hysterectomy.  Fang (2006) asserted, “abnormal adherent placentation [is] the primary indication leading to emergent peripartum hysterectomy…. As the number of prior cesarean deliveries rises, the risk of cesarean hysterectomy increases dramatically.”   In other words, all these primary cesareans and repeat cesareans are causing placentas to abnormally implant in subsequent pregnancies.  As a result, many women who have placenta accreta end up having hysterectomies as that is the best way to control the hemorrhaging that results from accreta. 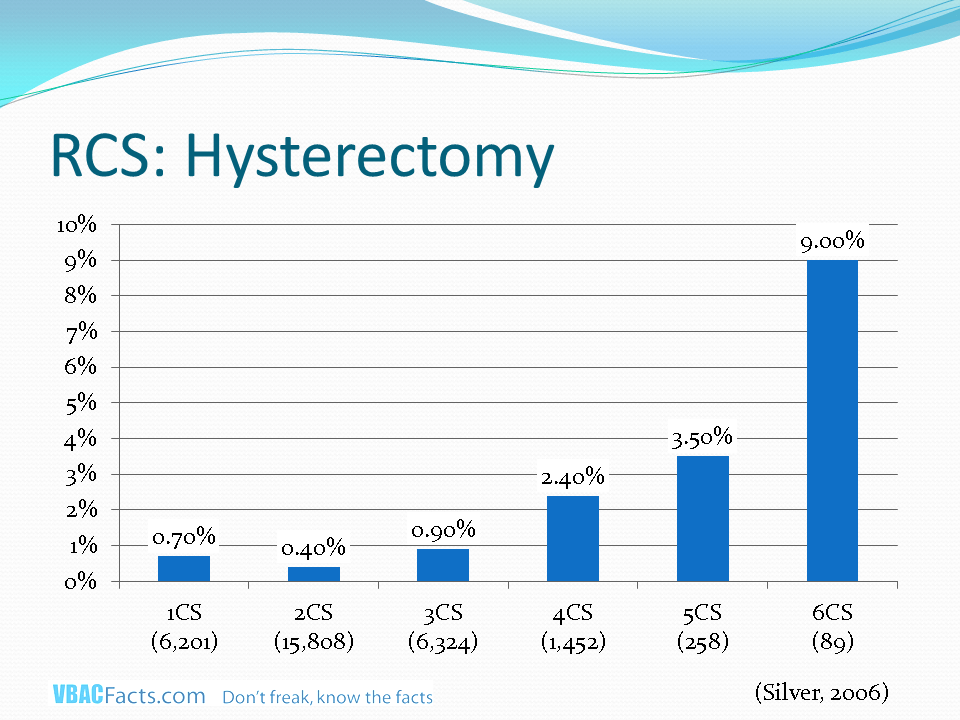 Women who had accreta also experienced the following complications:

Because the risks of cesarean are so great, Silver (2006) concluded with the following statement,

Because serious maternal morbidity increases progressively with increasing number of cesarean deliveries, the number of intended pregnancies should be considered during counseling regarding elective repeat cesarean operation versus a trial of labor and when debating the merits of elective primary cesarean delivery.

Conservative or alternate techniques for treating placenta accreta include:

Reported success rates of these procedures vary widely. In one recent study, 31 cases of placenta accreta were managed without hysterectomy; there were no reports of infertility or maternal death.

All the statistics I have shared above are from hospital based studies where women have access to operating rooms, surgeons, and blood products. I suspect that the likelihood of a mother dying from hemorrhage due to placenta accreta is significantly higher in an OOH (out-of-hospital) birth. This is why I think it is completely reasonable to have an ultrasound or MRI to try to diagnose accreta when planning a OOH birth.

Although second and third trimester bleeding can be a symptom for previa, I was surprised to read on the University of Maryland Medical Center’s website, “About 7% to 30% of women with placenta previa do not experience vaginal bleeding as a symptom before delivery.” Thus one cannot rely on bleeding during pregnancy as a reliable symptom for previa which is why ruling it out via ultrasound appears to be a effective plan. (No citation was given, so if anyone has information to affirm or refute this stat, please leave a comment.)

There appears to be some controversy about the ability to accurately diagnose accreta during pregnancy. According to a 2011 Medscape article by Dr. Robert Resnik, “the diagnosis [of placenta accreta] can be made with accuracy, by very specific ultrasound findings, about 80% of the time, and can be confirmed with MRI findings.”

However, in a 2010 article published in the Journal Watch Women’s Health, Andrew M. Kaunitz, MD states, “If ultrasound findings [while looking for accreta] are not definitive, MRI evaluation is appropriate. Unfortunately, the diagnostic precision of these two imaging modalities for placenta accreta can be suboptimal.”

I also highly recommend you read Dwyer (2008) which provides an excellent overview and compared the accuracy of the two methods:

Because of this high rate of maternal mortality and morbidity, some doctors suggest if accreta is diagnosed via ultrasound and/or magnetic resonance imaging (MRI) during pregnancy, a cesarean hysterectomy should to performed as early as 34 – 35 weeks. (Read Does Antenatal Diagnosis of Placenta Accreta Improve Maternal Outcomes? for more information on early delivery via cesarean section.)

What difference does it make if you know you have accreta before delivery?

Because accreta has a high maternal mortality and morbidity rate, a hospital plans for a birth with accreta (usually a cesarean if diagnosed before labor) very differently than a birth (cesarean or vaginal) without known accreta.

One night during my endless random reading, I stumbled across the Royal College of Obstetricians and Gynaecologists’ (the UK’s ACOG) clinical guidelines for placenta praevia, placenta praevia accreta and vasa praevia. (Note that the Brits do spell previa/praevia differently than Americans.) This document included a detailed description of how they recommend a hospital plan for a cesarean birth due to placenta accreta:

Taking this extensive preparation into account, I suspect that women fare better when accreta is diagnosed before delivery.

RCOG’s clinical guidelines also included evidence that of women who were diagnosed with previa early in their pregnancy, women with a prior cesarean where less likely than an unscarred mom to have their placenta “move” enough to permit a vaginal delivery at term (50% vs. 11%).  Since the study in question included over 700 women with previa, this is a large enough study to give us good evidence.

Women with a previous caesarean section require a higher index of suspicion as there are two problems to exclude: placenta praevia and placenta accreta.  If the placenta lies anteriorly and reaches the cervical os at 20 weeks, a follow-up scan can help identify if it is implanted into the caesarean section scar.

I looked up source 53 and it’s Dashe (2002) which shared:  “The outcome of the study was persistent placenta previa resulting in cesarean delivery.  This diagnosis was based on clinical assessment and ultrasound at time of delivery.”  You can read Dashe in its entirety by clicking on this link and then looking for the “Article as PDF” link on the right hand side.

Many women who don’t plan on having more children do not think these complications are applicable.  But I know many women, and I’m sure you do too, who were not planning on more children, but got pregnant nonetheless.  This is consistent with the CDC’s findings that 49% of pregnancies are unintentional.  Unless you or your partner get sterilized or practice abstinence (what fun!), the chance of you getting pregnant, and experiencing these downstream risks, are there.  It’s important when evaluating your current birth options to consider how that decision will impact the risks of your future pregnancies as well as your future delivery options.