Update November 29, 2017: Since this article was published, ACOG released even stronger guidelines specifying that any Level 1 hospital should be offering VBAC: “Trial of labor after previous cesarean delivery should be attempted at facilities capable of performing emergency deliveries…women attempting TOLAC should be cared for in a level 1 center (ie, one that can provide basic care) or higher.” (ACOG, 2017)

If ACOG ever intended for 24/7 anesthesia or OB presence to be required to offer VBAC, they would have used plain, clear, and unambiguous language to express that, not vague phrases like “immediately available” which are open to interpretation.

Update September 13, 2021: It’s been four years since ACOG clearly and unequivocally asserted that level 1 hospitals should offer VBAC and two years since they reiterated this sentiment in their 2019 interim guidelines. So why aren’t hospitals saying, “We have to offer VBAC because ACOG says so?”

Why do we still have hospitals in the United States mandating repeat cesareans while citing ACOG and “patient safety” when we know repeat cesareans only increase the risk of uterine rupture, accreta, and previa in future pregnancies?

Because it was never about patient safety. Only provider preference and liability concerns. And it’s really easy to coerce birthing people. Even though many want a VBAC, only 13% do in the US. 87% have a repeat cesarean and few are warned of the risks. If this was about patient safety, we would have transparency.

In 2010, I was sitting next to an OB/GYN during a lunch break at the National Institutes of Health VBAC Conference. She was telling me about how she had worked at a rural hospital, without 24/7 anesthesia, that offered vaginal birth after cesarean (VBAC).

I asked her what they did in the event of an emergency. “I perform an emergency cesarean under local anesthetic,” she plainly stated. She explained how you inject the anesthetic along the intended incision line, cut and then inject the next layer and cut, all the way down until you get to the baby.

It certainly wasn’t ideal, but it was how her small facility was able to support VBAC while responding to those uncommon, but inevitable, complications that require immediate surgical delivery. 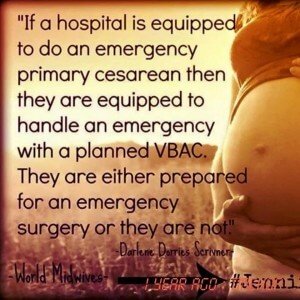 What a hospital needs to offer VBAC

They had everything a hospital needs to offer VBAC: a supportive policy, supportive providers, and motivation to make VBAC available at their hospital.

From a public health standpoint, it’s to our benefit to offer VBAC because repeat cesareans increase the rate of accreta in future pregnancies as well as hysterectomy and excessive bleeding.

Additionally, rural hospitals are NOT capable of managing an accreta because it requires far more than (local) anesthesia and a surgeon. (Read more on how morbidity, mortality, and ideal response differs between uterine rupture and accreta.)

When I hear of smaller, rural hospitals telling women that they can’t offer VBAC because “ACOG requires” 24/7 anesthesia, I think of that OB/GYN and ACOG’s (2010) guidelines which state

Women and their physicians may still make a plan for a TOLAC [trial of labor after cesarean] in situations where there may not be “immediately available” staff to handle emergencies, but it requires a thorough discussion of the local health care system, the available resources, and the potential for incremental risk.

So, yes, it is possible and reasonable to offer VBAC without 24/7 anesthesia.

Is this ideal? No.

But do you know what else is not ideal?

It’s not ideal to have VBAC bans mandating repeat cesareans that expose women to the increasing risks of surgical birth across the board as a matter of policy—risks that can be far more serious and life-threatening than the risks of VBAC.

It’s not ideal to have a double standard for those planning VBACs, because any woman giving birth may require emergency surgery.

It’s not ideal to have a cesarean (scheduled or emergency) at a hospital that doesn’t have a blood bank.

It’s not ideal for someone to drive hours from home, especially in labor, because no hospital in their community supports VBAC.

It’s not ideal to have state troopers attending roadside births for some of those women.

And it’s deadly for rural hospitals to be managing a surprise accreta.

So, we have to come up with better options.

We can’t continue to pretend that banning VBAC is in the best interest of families.  It does not serve our communities in the long run because it simply increases the risks of more serious complications in future pregnancies.

Learning how to perform a cesarean under local anesthetic makes hospitals—regardless of geography—safer places to give birth. It enables them to perform cesareans more quickly when they don’t have an anesthesiologist in the hospital but the baby needs to be born NOW.

This could make a huge difference in the outcomes for any laboring woman—VBAC or non-VBAC—as well as her baby.

How to reduce maternal deaths

Want to learn more about how to reduce maternal deaths whether they have a prior cesarean or not?

Join VBAC Facts® Professional Membership and attend our continuing education training “Decoding Maternal Deaths: Why Birthing People Die and How We Can Turn the Tide” where you will learn how racism, high BMI, and neighborhood impacts risk, how often these deaths were preventable, and exactly what steps to take so we can reduce maternal deaths, one person at a time.