Planning a VBAC can be an emotionally victorious or tenuous time for parents. Or a mixture of the two. What parents planning VBACs really need is to feel heard, supported, and respected.

The challenge is, they don’t know who to trust or to whom they can open their heart. Fortunately, there are a variety of subtle ways you can signal to them that you are someone who truly supports VBAC.

The language we use reflects what we believe. We often use words or phrases because that is what we have always done, that is how we were taught, or it is a reflection of the time and space with which we live. But sometimes, those words can hurt and sting without us even knowing.

Four loaded words that may sting VBAC hopeful parents include: “attempting,” “failed,” “TOLAC,” and “preferences.” (The word “allow” also carries a strong stench of paternalism that has no place in health care.)

“Attempting a TOLAC” is disempowering

Let’s start with the word “attempting” as in “attempting a TOLAC” or trial of labor after cesarean.

This term is used in the medical literature, so professionals and policy alike mimic this language. And as a result, these are the words parents use.

It is painful for me to hear parents talk of how they are “attempting” a TOLAC. It’s so disempowering.

The term TOLAC is filled with the feeling of “let’s see if you can really do this.” It is a word that compounds and pokes the existing swirls of emotion that some cesarean parents carry.

Hearing their provider use the term TOLAC does not make them feel supported. Rather it makes them feel like their body’s ability is being questioned and tested during this “trial” while adding a sense of worthiness and competition to their “performance.”

We can do better.

“Planning a VBAC/LAC” honors the journey

I use the phrase “planning a LAC (labor after cesarean) or VBAC” instead of “attempting a TOLAC.”

It’s my way of subversively changing the language we use around LAC.

Just like I’m not “attempting a marriage” even though divorce rates are high.

The truth is we set goals, we think about what we need to do to accomplish those goals, and we put those actions into motion.

We make plans knowing the odds, knowing that something might throw us off course, and our plans are valid regardless of how it ultimately plays out.

There is nothing passive, tentative, or powerless about that process… even though we are not in control of the outcome.

Just as our support for newlyweds doesn’t need to carry a “let’s see how long you can last.”

When I see the word “failed VBAC,” especially written in medical studies or records, it pulls at my heart.

There is so much focus – and judgement – on the outcome of a LAC rather than honoring the journey.

On top of everything else, when many parents hear “failed VBAC,” they feel like they failed. Their body failed. They are a failure. And those feelings of brokenness can percolate into other areas of their life and even haunt them in the next pregnancy.

So let’s toss the phrase “failed VBAC” or “failed vaginal delivery” from our vocabulary.

A wonderful alternative is CBAC or cesarean birth after cesarean. Or simply an unplanned (repeat) cesarean.

This language honors what the pregnant person wanted, their journey, and the outcome without judgement.

Now there’s a lot of things that could get in our way of accomplishing any of our goals, big or small, but we still make a plan, set the objective, and take the first step.

Which is why parents make “birth plans” not “preferences.”

I disagree with the notion that because we cannot control everything in regards to childbirth, parents should not make a birth plan.

If that was our approach to life, we would never accomplish anything because the potential of our plan going off course is always there. Whether your plan is to have a happy marriage, eat less sugar, or be more patient with your kids.

Now you may be thinking, “It’s not my intention to hurt anyone. This is the language I’ve heard used, so I use it.”

But here’s the hard truth: we need to focus more on the impact of our words than our good intentions.

It really doesn’t matter if we intend to hurt someone or not. If our words or actions harm, the only recourse is to take responsibility, apologize, and change course so it doesn’t happen again.

While this is especially difficult in situations where you would not be bothered in the least, we have to continually remind ourselves: We are not the standard to which other humans are held.

It really doesn’t matter if you have had a cesarean and the term “attempting a TOLAC” doesn’t bother you. If it stings your client, you need to listen.

That’s assuming that your client feels safe enough to request a language change. Many don’t. Which is why revamping your language across the board communicates to all your clients your sensitivity and desire to see, hear, and meet your clients where they are at.

In other words, it’s not the birthing parent’s obligation to toughen up.

It’s the responsibility of those who care for them to bring more humanity into health care.

The fact is we have the power to change this language. Today. Right now. We don’t need anyone’s permission.

We know from birthing people that if they feel respected and heard throughout the pregnancy and labor, they are more resilient if their planned labor after cesarean turns into a cesarean birth after cesarean.

We don’t need to reiterate to them throughout their pregnancy their chances of “failure” by focusing on their “attempts” to “TOLAC” and creating a list of “preferences” instead of a plan.

We need to use language that reflects their wishes and recognizes their journey while reinforcing your role as someone who supports their plan.

So let’s toss “attempting a TOLAC” for “planning a LAC/VBAC.”

Let’s support our clients as they create a birth plan, not preferences.

After all, we aren’t “attempting” life.

We are living it.

As a nationally recognized consumer advocate and Founder of VBAC Facts®, Jen helps perinatal professionals, and cesarean parents, achieve clarity on vaginal birth after cesarean (VBAC) through her educational courses for parents, online membership for professionals, continuing education trainings, and consulting services. She speaks at conferences across the country, presents Grand Rounds at hospitals, advises advocates seeking legislative change in their state, and serves as a expert witness in legal proceedings. She envisions a time when every pregnant person seeking VBAC has access to unbiased information, respectful providers, and community support, so they can plan the birth of their choosing in the setting they desire.

Parents pregnant after a cesarean face so much misinformation about VBAC. As a result, many who are good VBAC candidates are coerced into repeat cesareans. This free report provides quick clarity on 5 uterine rupture myths so you can tell fact from fiction and avoid the bait & switch. 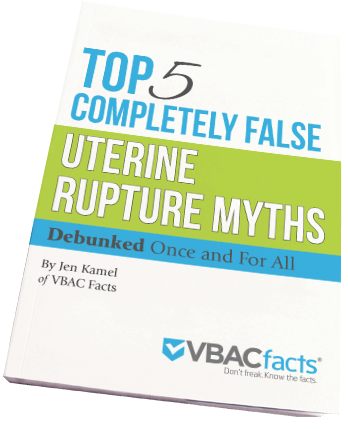 VBAC Facts LLC does not provide any medical advice and the information provided should not be so construed or used. Nothing provided by VBAC Facts LLC is intended to replace the services of a qualified physician or midwife or to be a substitute for medical advice of a qualified physician or midwife. You should not rely on anything provided by VBAC Facts LLC and you should consult a qualified health care professional in all matters relating to your health. Amazon Associates Disclosure: Jen Kamel is a participant in the Amazon Services LLC Associates Program, an affiliate advertising program designed to provide a means for sites to earn advertising fees by advertising and linking to Amazon.com. Created By: Jen Kamel | Copyright 2007-2019 VBAC Facts. All Rights Reserved. | Terms of Use | Privacy Policy

Join Us in Spreading Evidence-Based Info About VBAC and Making VBAC More Accessible for All!
LEARN MORE